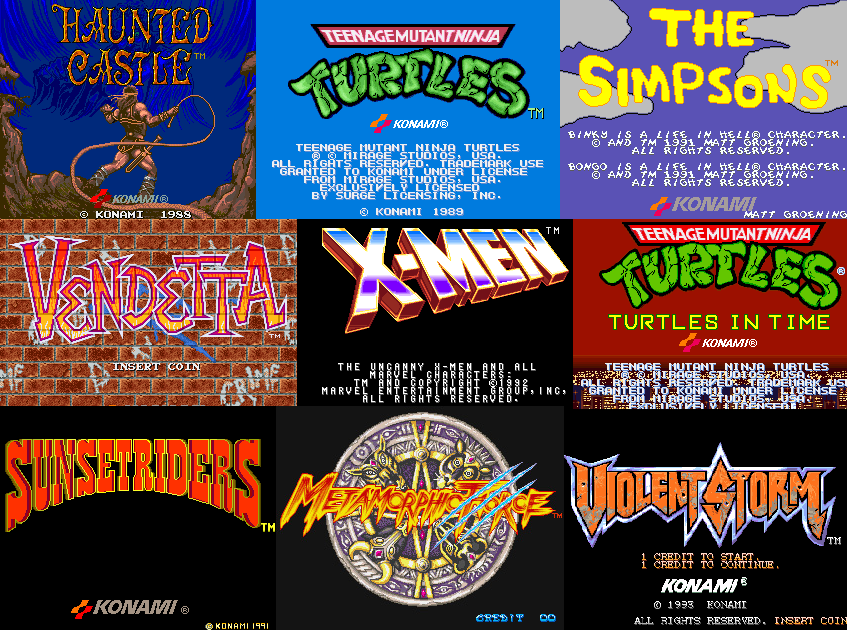 When they get ideas, they stick with them. Now imagine the belly dancer comes out during a boss fight and at set intervals he stops fighting you while distracted by her, giving you an opening. You beat the boss and the two of you high-five

Put a quarter into any of these and you knew you were in for a good time. Konami just always seemed to know what they were doing. (Even when they were tasked with that impossible problem of how to make a good Simpsons game, they found a solution: don’t, just make a solid beatemup that happens to have Simpsons characters.) They found their formulas early on. Typically there’d be very little story to get in the way of the experience, with mostly unmemorable main players, all men brimming with ’80s-level testosterone, and the goal of saving kidnapped blonde damsels, that most familiar yet intolerable of situations. But from that simple canvas, their colors really pop.

Elements that should be simple like in-game voice acting become legendary when Magneto welcomes you to die. The engrish isn’t at the level of Captain America’s “Why should it goes so well” but the boisterous delivery with thundering echo is what sells it. It’s mistranslation at its best, as though even their weaknesses played to their strengths. Even the no-name cabinet art actors were charming, the same way I enjoy those “we don’t quite know what we’re doing but come on who’s going to see it” live-action scenes in early Playstation 1 games like Twisted Metal, Resident Evil, etc. 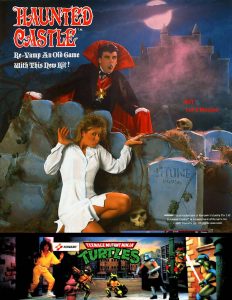 And when they do know what they’re doing, the chaos only synergizes. The Konami Kukeiha Club’s music is an experience, ranging from the classic Haunted Castle/Castlevania soundtrack, to the out of control Violent Storm free-for-all, to the ‘I have not stopped listening to this music in 30 years’ Ninja Turtles jamfest. Even their oddball entries like Metamorphic Force takes its music seriously. This is their first level bgm, meant to pump you up and get you ready for epic adventure, and boy does it. What they did with those synth drums is unreal.

They were all a fun time, but to me the best was saved for last. With Violent Storm, perhaps knowing it was to be their last go at the sidescroller beatemup genre, Konomi threw everything they had at it. This game was designed from the ground up to make you feel good. The artwork was all bright colors with light contrast, huge sprites and waves of satisfyingly easy to defeat drone enemies. But what draws me in the most is the countless little things happening in the background that must have been the product of long bouts of insane imagination. The guy you can knock off the pier to get a fish powerup, the seasick enemies that float in from the boat, the bellydancer’s cat chasing the mice running around in the kitchen, the infamous train pigs.. and I like in the first stage how you catch a glimpse off in the background of the level boss running ahead to intercept you. (You don’t see that kind of thing often – like wouldn’t it be cool if there were a MegaMan stage where the boss was in the background taking potshots at you or something instead of sitting around waiting?) Plus there’s other little things like the women you rescue from the prison throwing you a valuable looking ring as a thank you (points, not health, but hey it’s all they had). And at the start of the final battle when the boss destroys the building you’re in, briefly seeing (and hearing) off in the background the green henchman desperately clinging to the falling debris.

I’ll focus though on two details in particular that struck me, both found during the final level.

The first detail is the hallway with all the portraits of the game’s bosses – a much nicer technique to show how far you’ve come than having to re-fight all of them (plus most of the boss fights ended with what appeared to be their very likely deaths). You battle through the hallway seeing the bosses you fought in order, and at the end you see the last boss you’re about to meet, a sort of pre-introduction. Neat. But look closely at his portrait:

If like me you’re having a hard time taking your eyes off the adorable old dog by his side, then you’ll likely notice the same thing I did when I finally reached him:

There is no dog by his side now, instead the kidnapped woman is there. Readers of my previous posts know that I’m an extreme sucker for implied stories, and I can’t help but speculate that the suggestion is this (apparently 13-ish-year-old) gang leader had this woman kidnapped because his dog finally died and he needed something to cover his loss.

The second detail is the poster of the bikini model, in the room directly after that hallway of portraits.

Odd, seems conspicuous in a room with no other posters, I wonder if it’s supposed to mean any– wait a minute, didn’t I see that character before? The pizza girl in tattered clothes from the Downtown stage, didn’t she have red hair and about the same skintone?

The sweetie who gave me a free pizza powerup when she saw what I was doing and cheered for me as I defeated the bad guys?

Now I admit I could be totally misreading what may just be a random poster, but keeping in mind how it came immediately after the ‘trip down memory lane’ hallway of other posters, something’s suggesting to me there’s a possibility it could be her. And if it is, I’ve just been given an unexpectedly deep, heartwrenching backstory of a once popular magazine model who fell to the depths of minimum wage pizza delivery in this post-apocalyptic world, and I have to stop and take in how this game just took their loving details to a whole new level – all casually slipped in with just one NPC sprite and a 32×47 px poster.

The happy ending of course is when you beat the game and she along with most the random goofy NPCs from all the levels come out to see you off, now freed from the grip of the evil gang that roamed the city. I love endings like those, even in short games.

But wow, this ending has its own set of details if you beat it multiplayer. It’s the classic Double Dragon problem: you’re a bunch of players fighting to save one love interest. She can’t just, like, marry all of you. For the game to have some finality/payoff, she’s going to have to choose (Double Dragon Neon had a cute way of deciding – you just beat each other up for her in the last scene, like real brothers would). Here, it’s whoever lands the final hit on the final boss. She’ll run into the arms of the winner (with a ‘Yaaa-hoo!‘ as upbeat as the rest of this crazy game) while the other players look on in dumbfounded poses. Okay fair enough.. except the game doesn’t stop there. It rubs it in for the farewell scene when the car pulls up and the winner gets in with the woman, smiling, and the other two gritting their teeth as they pull away. I don’t think an arcade game has ever made me laugh out loud like that – well once, from the Simpsons ‘slam the buttons to maniacally smack awake your sleeping character‘ minigame – but certainly not by using so little detail.

In short, Violent Storm is my favorite of Konami’s many fun beatemups. It’s one of those games where you won’t find a lot of fanart of the characters because they’re not the focus – the whole game is the focus. There’s no time to develop anybody because the entire experience is an extravaganza. To leave me at the end of it all thinking not about “oh I’m so glad thus and such character got reunited with thus and such” but rather “hoo boy that was a wild trip” and then letting my imagination later fill in the blanks about more mundane stuff like “I hope that pizza girl gets another magazine deal now”, that to me is a game that nails it.

Or I wonder if she ever runs into.. wait a minute..

UPDATE: Just to emphasize how this game seems to tie things in to each other more than you’d think, I recently played it again and noticed a detail that escaped me. Early in the first level, look who makes a cameo:

Tell me that isn’t the same dog that’s in the boss portrait. The redhead in the poster you could maybe pass off but this you can’t. That’s the same breed with the same squinty eyes and floppy ears. Talk about happy endings, this game just gave me a happy beginning – I’m forced to interpret that while the end boss still kidnapped the girl to fill in a broken heart, whether or not he knows it, the dog didn’t die, he escaped to a better life. It turns out he even shows up in a couple of other stages too, as if he’s following you hoping for your success. And if I’m not mistaken, his last cameo is with the bellydancer’s cat.

If these game makers are willing to weave in that level a detail into their story, I’m legitimately thinking it’s not just my subtext-hungry imagination, but that may actually supposed to really be the pizza girl in the poster. Sometimes it’s easy to tell when game makers put genuine love in to a game, with all this extra depth they didn’t have to add. When you find it, it really resonates. The more I play this game the more I like it.