Hobbyist spriter HadesDiosSupremo sent in a sprite he built from closely following a highly rendered reference that was beginning to frustrate him:

“I want to learn more but I feel that I’m always stuck with the same mistakes … I know that I have those mistakes but I don’t know how to fix them or improve myself.”

In this case, he was tracing out a sprite from a 3D model image and finding that his regular spriting methods weren’t very helpful. 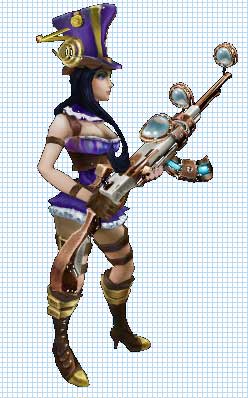 “I’m using her 3D reference and I put the 3D model in 16 colors. Then I resized it, comparing with another CVS sprite and then I did a sketch with the image and I used alternative colors to do the shades from her sprite, and finally I colored with her original colors. I always see mistakes and I try to fix them. The difference when I’m not using 3D model is that I just start with the 2D base sprite and I continue doing the same.

I think my biggest problem is that I don’t know how to shade it because I couldn’t understand how the lighting worked. I also put too much details, and I don’t think it’s very good for a CVS sprite.”

The problem is that the sprite is just too detailed and complexly shaded. This is because the reference is too realistic-looking compared to the target art style.

1) You’ve got the face pretty much perfect, which is a good place to start — many artists feel most satisfied during the building process if they can get a good face done first and then work out from that.

2) You’re handicapped with brown and purple, since those are colors that’re going to blend in with each other. As usual, the small size of the sprite will make problems like this worse.

3) The arm seems a little too rounded, which may be a shading problem

6) With straps this thin, don’t worry about outlining them. Instead, go the opposite route and make them blend in at the edges

7) Too much spotty and distracting “shine” detail on the boots. It distracts more than it explains

8) Make the ends more rounded so they wrap around the leg more. This is one example of where you have to ignore the 3D reference and make it look better in translating to pixel format

8) Simplify the shading on these, reduce the outlines and make them more rounded

When tracing a photo or 3D model, it’s difficult to distinguish what parts of the reference should be kept and what should be ignored. And I’m not against tracing, either — when you’re learning the alphabet, you have to trace the letters to get the feel of how to correctly make them into your brain. The important thing is that you start to branch out with some artistic decisions of your own at some point .. and this, you’re about to see, is one of those points.

Whenever a sprite you make is unsatisfying and you don’t know why, ask yourself these questions:

Get a new set of eyes when you de-color-ize. Note the silhouette doesn’t show the gun end, and the black and white shows spotty shading

Using this technique, we can see that the details (grayscale) and shading (black and white) are a bit overdone, but the bigger of the two issues is the shading.

Hades, I’m going to guess that you worked on the shading too early on. Probably you were adding shading as you were putting the whole sprite together. (I say that because you got extremely detailed with some areas of the lighting, and the brain naturally gets detailed in the early part of building a sprite to make sure it’s within the right confines).

So here’s how you fix this problem in your future sprites: First make the pixel linework. This is the stage where you can be detailed and intricate. Then add the colors. Save the shading for last. The shading is where you want to work broad, big and quick. So in other words, start building your sprites in stages instead of all at once.

To show you how effective this “draw now, shade later” technique would be for you. I’ll fix it up the same way I want you to build it. So first I’ll erase all the lighting.

The same sprite with no shading looks surprisingly nice, now that it’s less complicated. That’s a hint that the shading was indeed the main culprit.

Just by doing this simple step, two interesting things have happened: I’ve made the sprite and all of its details about 50% easier to work with and fix, and second, I’ve somehow made it easier to look at.

What’s that? How can a half-done sprite be easier to look at than a finished one? This shows that the old artist’s practice of keeping visuals as simple as possible is effective no matter where you use it. With less detail, your eyes don’t get overwhelmed with too much to sort through. This is an especially important principle when working with small pixel artwork like this — with sprite art, a few pixels of cloth folds take up a greater percent of your art than a few strokes of detail on a full-sized drawing.

(Still, rules are made to be broken in the art world, and you can add some strokes of visual interest to a simply rendered sprite by over-detailing very specific parts, like in this case those white frilly parts of the outfit. It’s another visual way to add contrast.)

With the distraction of the lighting out of the way, I can see that the arm needs some straightening and the straps on the boots need to be more rounded. The fingers could perhaps be thinner, too.

How do we light it while keeping it as simple as possible? By using big, easy-to-understand-at-a-glance slabs of light patches to help explain the shapes that they’re lighting. So for example, I’m putting a long, rectangular light patch on her forearm, and extending it almost to the elbow. That helps explain the long-ness and straightness of her arm and accents its 3D shape in space.

Applying the shading becomes easier and makes more sense, now that the details are fixed. Fingers are thinned out with some advanced pixel tricks, hair is re-highlighted, gun is re-shaded with high-contrast shading.. oh, and the color-count is reduced to 15, plus the background image for that extra bit of authenticity.

So Hades, for future sprites, try something different: trace the image like you normally would, but don’t shade it. Just do the linework and base colors. Once you’re done, put the traced image off to the side and just use it as a reference for the shading stage. This will be the start of your branching off from tracings/edits toward the rewarding world of your own artwork in sprites.