Spriting maniac FeLo (a.k.a. FeLo_Llop) is constantly posting re-styled game sprites and work from his numerous MUGEN projects. One of those projects is a Capcom vs SNK restyle of Cammy, and among the frames of the work in progress he showed for review were these

My suggestion was to reduce the stomach shading and fade out the distant hip shading. I often make the mistake, however, of trying to explain in words what would better be explained by example, so because FeLo’s work is always inspiring, I decided to just make my change suggestions right on the sprites. (As usual though, I promptly got carried away and went over pretty much the rest of the sprite).

The process I used for sharpening a sprite used to be just going over it pixel-by-pixel and watching my changes in a 100% sized window on the side. But today, now that I’m pretty much married to Photoshop color-reduction, I get faster results fixing sprites by enlarging them and going over everything with brush tools.

Step one was to bring the sprite into Photoshop (or GIMP or Paint.net or such), and enlarge by 400 or 500%, at “nearest neighbor” interpolation. From there, I converted to RGB, then back to Index Mode. The Palette selection was set to “exact”, with dithering, forced, and all the other options off. Doing that temporarily saved the existing colors of the sprite into Photoshop’s memory. 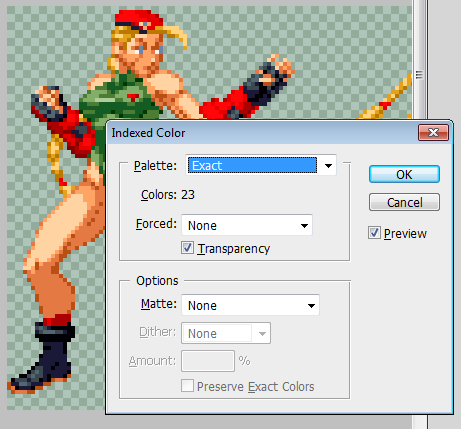 I converted back to RGB and got to painting the big areas like leg shading. This is a huge improvement over pixel-by-pixel changes because I already mentally know the shape I want for the light patch on the leg, so I can instantly put it down instead of slowly having to trudge my way toward it and risk over-analyzing each pixel along the way. 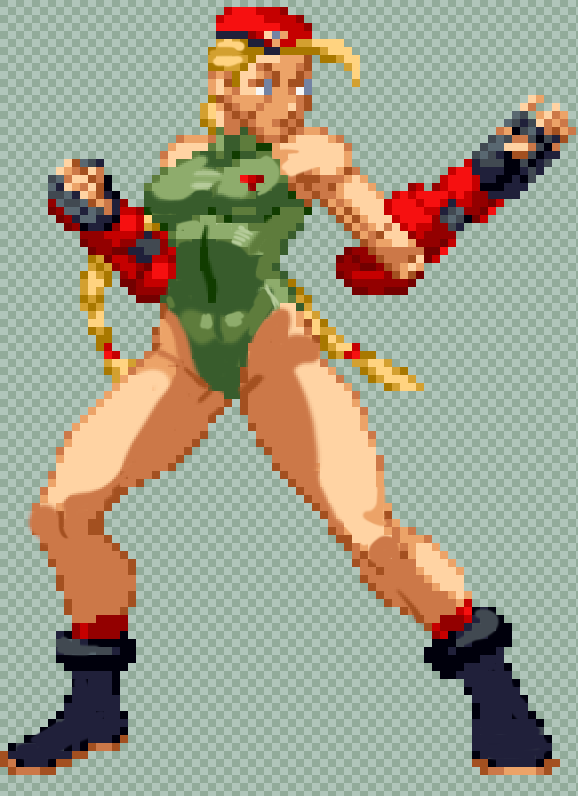 Once I got the brush tool to take care of the large sections, I was ready to go back and do the regular pixel-by-pixel work. So I shrunk the sprite down by 25% (20% if you enlarge by 500%, 25% if you do 400%) and of course, got some smeary pixels with dozens of colors around the edges because of the brush tool. But lo, all I had to do was convert to Index Mode and choose a Palette option of “Previous” and guess what — Photoshop remembered the colors of the original sprite and automatically converted all extra colors to their nearest values, leaving me with a cleaned sprite with no extra colors. See why I’m a Photoshop nut?

From here on, it was just a matter of having the right mindset in giving all the pixels the right adjustments to make the sprite look more cleanly shaded. This usually means reducing things to almost plastic, cartoon shading to simplify everything as much as possible (which is important for artwork this size), but also maintaining some artistic style.

Reducing extraneous detail in this case meant taking out one of the red shades (not enough area to justify it, and the details of the glove are too tight to fit in a lot of shading), reducing the shading of the boots (they’re still going to need laces later though, so I didn’t do much there), and generally reducing the amount of detail crammed into small areas (her front elbow, her hair).

Taking out extra details doesn’t mean making things boring however. Adding quiet subtleties that don’t distract or disrupt from the whole image takes a special effort in art this small, but the results can make people forget just how big pixels actually are. Examples: the hint of the shinbone on the standing sprite’s extended leg, and the suggestion of a line in the middle of the standing sprite’s chest, implied by the abrupt end of its stretched fabric highlights.

So in the end, I put together all the changes I had in mind quickly and easily. Major areas were covered quickly with the brush tool which left only the subtle, more challenging changes for the 1-pixel pencil tool. Thus I got the full satisfaction of getting Into The Zone with pixeling while not wasting time with larger and more mundane areas. Huzzah!