The Making Of: El Zombo

I often notice how few game styles I have in my portfolio. Even though it’s because I get the most satisfaction from building the art school-ish block shading of “Capcom vs SNK”, it also means all the techniques I share with people are only made for that one look. What about people who want to edit Mugen characters from other games, for instance? Can the Grayscale Index method that I normally use be adjusted for different styles?

Recently, I got a chance to find out. I was making a sprite for artist extraordinaire Dave Wilkins who requested his character in the ever-popular Marvel vs Capcom (a.k.a. Street Fighter Alpha) style. Challenges laid out, I put together some ideas and went to work using these steps: 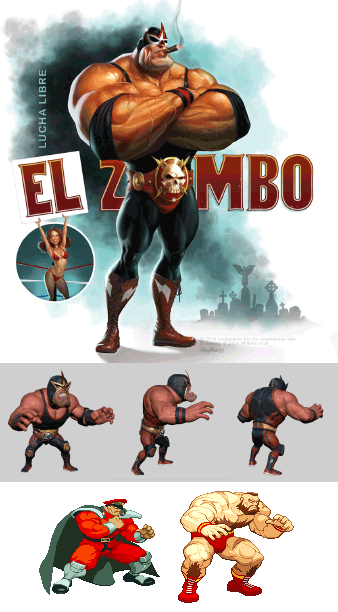 Taking the references for El Zombo and also some sprites to refresh my memory of Alpha/Marvel lighting intensity and direction, I sketched out a pose using my trusty Wacom Sapphire and Photoshop with a wide brush at 20% opacity (my favorite way of throwing down lines and then building up shadows), with an eraser at about 50%. This would be the initial artwork, but not the actual image that I’d sprite from, so I could go crazy with shading and pose experiments.

I used a Zangief sprite enlarged to 400% to approximate the size I wanted, so I knew I’d be able to shrink the art by 25% when I was done instead of trying to eyeball it. Once I got something that roughly fit within the proportions for a Marvel game (with the biggest upperbody and smallest legs that would fit the style), I had something solid I could trace for the sprite’s lines. 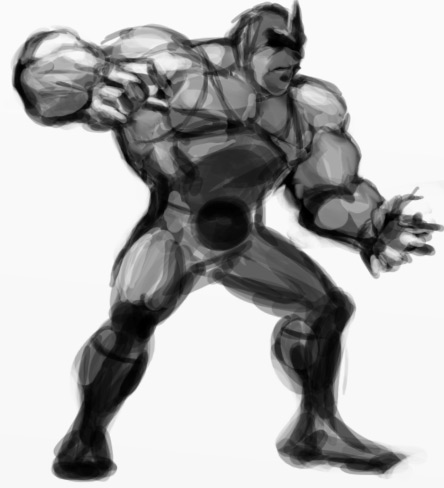 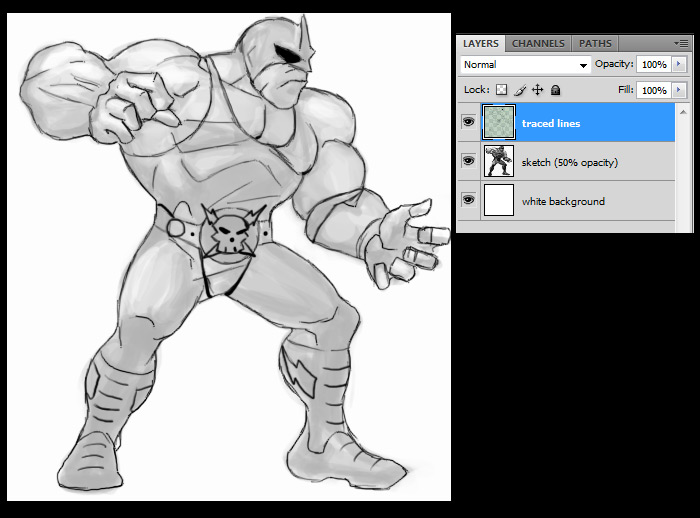 Switching over to ArtRage Studio for my lines, the important thing is that they be not only as thin as possible, but also as sharp and dark as you can make them at the same time. The absolute ideal is to use thin vector lines, but Illustrator shuts my brain off. If you’re doing the lines right in Photoshop, GIMP, Paint.net, etc., draw them on an empty transparent layer. Otherwise, make sure you can import your lines into Photoshop without a background.

As always, make sure the lines are connected and no outline is broken. You need that so you can use the Magic Wand tool to select the space outside the sprite without the selection breaking through the outline and creeping into an inside area.

Once again, I was treating these lines as anchor points for when I shrunk the artwork. This means that small details like fingers and facial features have to be drawn as dirt-simple as humanly possible so that details won’t get smushed together and made incomprehensible when shrunk. In this case, the fingers are so comically large that there wasn’t much risk of that, but the belt details for instance were going to be touchy and the boot laces just needed placeholders.

This is where things change from working with a single dark and light layer to matching Alpha/Marvel’s multiple shading levels. So for a reference, here’s Adon:

Notice the five skin colors. This is pretty typical for the style. Notice that aside from very specific splashes of highlight, there’s one main color for light area and one for shadow, and then the rest of the colors are devoted to smoothing and fading lines. How to imitate this? First, on the layer with the lineart, use the Magic Wand tool (“Contiguous” checked, “Anti-aliased” checked, “Tolerance” to maybe 15 or 20) to select the space outside of the sprite. Then go to SELECT > INVERT SELECTION. You now have the area that the sprite takes up selected, so create a new blank transparent layer underneath the lines layer and fill the selection with a 50% gray, then De-Select. You’ve now filled in the sprite’s lines way faster than if you were gingerly doing it by hand with the brush tool. 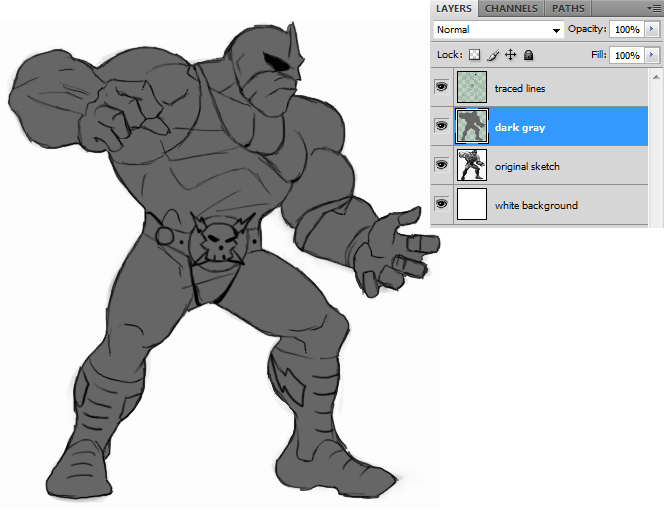 Now create a layer between the gray fill and the lines, and while it’s selected, find the command for “Create Clipping Mask” (in the Layers panel pictured here, it’s found in the top-right dropdown menu that has those 4 small lines). This wonderful command will make the new middle layer’s contents stay within the contents of the gray layer beneath it, and in the layers panel, you’ll see that the layer indents to show that the clipping mask is in effect. Fill that whole layer with 70% gray. Voila, you’ve easily filled in the sprite with a light area without going outside the lines. Now we’re going to draw the shadows with the eraser tool. Pressure-sensitive Wacom tablets are supremely helpful here. This will also be a matter of your skill in imitating Alpha/Marvel linework — find good references and draw lines into the light areas with the Eraser tool that will compliment the lineart you already have, and then simultaneously erase out the shadow areas. Remember, like good theatrical lighting, this style gets darker the further away the body parts are from the camera, to emphasize dimension. 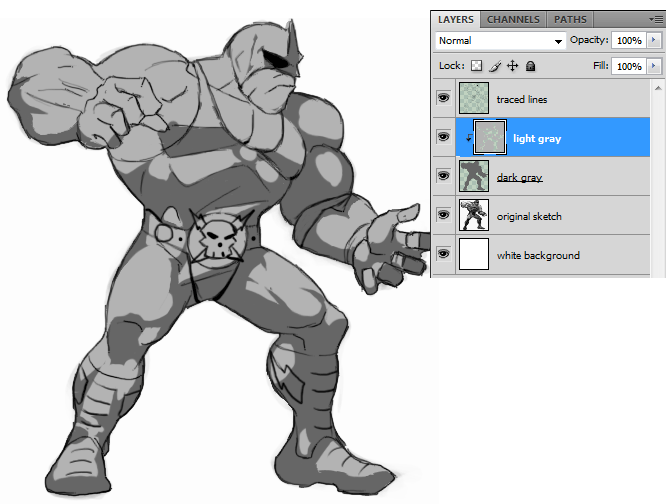 Next, it’s time to add in the highlight patches. Create a new layer above the light gray layer and make it a clipping mask also. This will simply be a quicker version of the light area you just did, requiring a few accents wherever you sense the style requires, and then adding in any needed linework with the eraser again. 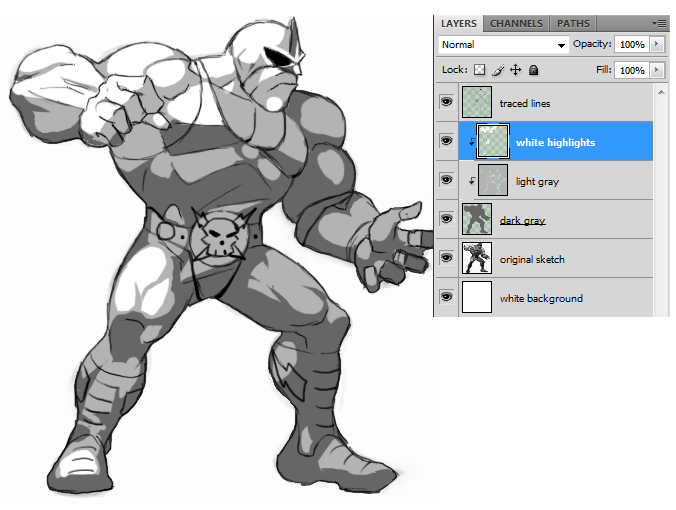 Finally, to brighten the outlines in the light areas, duplicate the ‘white highlights’ layer and move that duplicated layer on top of the ‘traced lines’ layer. Turn the duplicated layer into a clipping mask and reduce the opacity to 50%. Now your outlines will be dark in the dark areas and light in the bright areas. 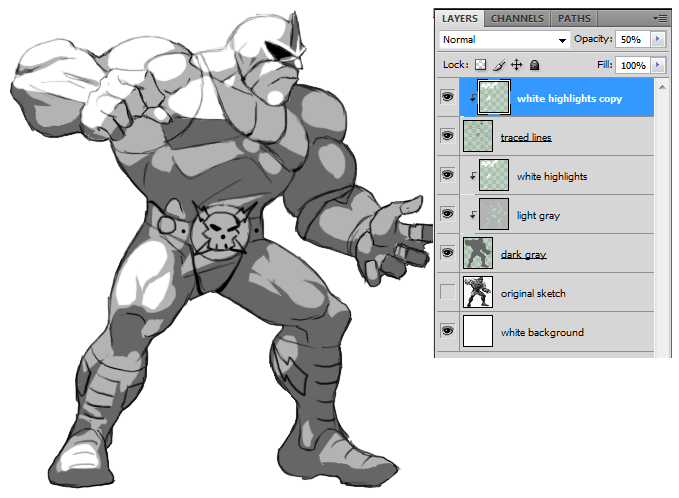 Now it’s time to actually get things to the final size and see what we’re up against. Since I used the Zangief sprite to size it, I know I can just shrink it 25% (with a bicubic interpolation). Believe me, it’s much easier this way than trying to manually shrink artwork by eye.

At last, the moment of truth. Will the magical color-reduction sharpening trick I normally use work just as well for this style?

True, it’s not quite as effective as before, but the amount of work it takes to clean is still far less than if it were all done by hand. Clean up the details like fingers and outfit accessories (the skull on the belt, etc.), make sure the outlines are toned down so they’re not too thick and not too jagged (note how I smoothed and thinned out the curves of the undersides of his legs’ outlines), sharpen any possible angles to make details easier to read and to take advantage of the angular nature of pixels (the prime example is the lines for the quadriceps on his right leg, in the light), and adjust things like head tilt to make the mouth conform to a pixel-able direction (that’s an advanced topic for later discussion: planning a sprite’s pose and positioning ahead of time for pixel-able details).

Well the hard work’s pretty much done at this point. Now it’s just a matter of converting back to RGB mode, adding a layer on top of the sprite, making it a clipping mask, setting its blending mode to Multiply, choosing some light base colors and filling things in with the pencil tool. Again, the color choice doesn’t have to be perfect, just enough to separate the skin from the shirt, legs from boots, etc. Once your colors are filled in, merge the layers and adjust to your heart’s content with Photoshop adjustments. Your contrast will automatically be lovely. If you run into trouble while adjusting your colors, palette-stealing from another sprite with the colors you like is always a sure-fire fallback strategy that works perfectly well with this technique. 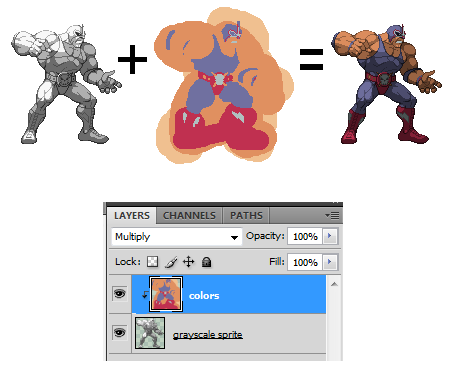 With the colors in place, you may find some minor details suddenly look off. Face wrinkles, certain muscle lines and maybe some outlines may need to be adjusted with your new set of eyes. But at this point, it’s a matter of sitting back and going over the pixels at a leisurely pace. Don’t be in a hurry to post things. You never know what little thing you’ll find a day later. 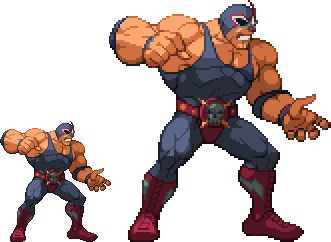