I’m convinced you can be nostalgic about literally anything these days. From game magazine ads to Geocities websites to entire software packages*, it seems like we’re determined to miss everything.

Those are obscure tastes.. but then there are the really obscure tastes. The people who take it to another level. These are the people who try to replicate VHS effects in modern video editors and experiment with glitch art on Tumblr. These are my kind of people. Not because I’m a fan of the end results (I always thought glitch art was too ugly) but I’m a fan of their thinking. They’re taking the imperfections of technology – even those that we had to put up with grudgingly – and turning them into a character all their own.

This is American wabi-sabi. Modern, digital examples of an eastern philosophy revolving around the beauty of imperfection, the changes of age, the natural, the simple, and the organic.

Leave it to the East to put a name to that indefinable experience I’ve always felt when looking at large abandoned parking lots being slowly reclaimed by nature, tall grass growing through cracks of the vast empty blacktop in an oddly capturing scene. I could never pinpoint why but man I loved those, and when I first ran into the concept of wabi-sabi, I realized there were other people thousands of years & miles away who would have, too.

And leave it to the West to encounter that distinctly nature-themed philosophy in technology. Finding what could be described as “natural” imperfections in cold, machine-driven technology – a counterintuitive concept in itself – and then on top of that finding a beauty to them. The human brain is capable of some real acrobatics.

This may be a niche interest but lately it seems like every time I turn around there’s another example of wabi-sabi on the internet. I’ve noticed it in 3D tutorials now teaching how important it is to add imperfections to your materials to make your renders more believable. I see it in blogs dedicated to abandoned photography. But I especially find it in those crazy nostalgic communities. My star example, which has been flying under my radar for a while now, is CRT shaders. Yes, the old Cathode Ray Tube TVs your grandparents used to play NES games on apparently has quite a cult following, and judging by the age of some of the articles about it, has had a following for decades.

That following is for a variety of reasons, a lot of them intimidatingly technical, but the Cliffs Notes version is CRT shaders are effects for modern displays that mimic that look of old pixel-blurring screens. Retro gamers like them because they’ll make emulated classic games look more like what they did on their old TVs, plus they can add a retro look to modern games. But because there were so many different kinds of TV displays, there’s more than just one shader style out there, which is where things get a little nuts. Some displays are just basic scanlines (the equivalent of adding a comic book halftone effect to your drawn artwork), while others do amazing things to pixels. And that’s how it stopped flying under my radar. 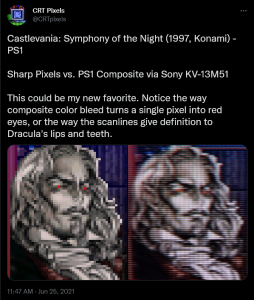 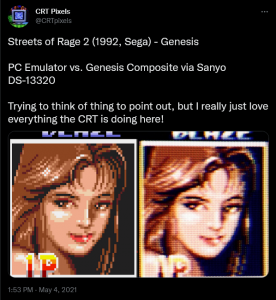 Specifically, when these were posted

I got into pixels way back when sprite ripping was first taking off. My LCD monitor was 14 inches with 1024×768 resolution, meaning pixels naturally blended well into each other and you didn’t need to zoom in to get a good look at them. That gave pixels a different look from the blur they had from arcade and TV screens – now they were super crisp, sharper than just about any other type of artwork you could find. Talk about a paradigm shift. But far from being a negative, the days of ripping and trading sprite were a revolution. Now you were seeing art from your favorite games as they really were (note the difference to the CRT-enthusiast’s preference for sprites ‘as they were meant to be seen’). People were loving it and taking it very seriously. You’d be constantly cautioned in those days to never save your sprites to JPG format, only gif/png, because otherwise the JPG algorithm would smear the pixels.

Nowhere more seriously at the time than Pixelation.

Fast forward to today, and now retro gamers want to smear those pixels. Some connect their laptops to actual CRT TVs and photograph their games/pixel art from there. What is old is new again – it’s the digital graphics’ swing back to vinyl. Back to having things less flawless/computer-controlled, and more simple/natural/human-controlled. More wabi-sabi.

Crisp or Retro. The funny thing is, there is no right answer – pixels do great with both. For just a bunch of color squares connected together, pixel art sure is a versatile medium.

I’ve thought about hooking up my laptop to an ancient TV I still have laying around, and maybe even pixeling a portrait on it the way all those early game makers would have done. But questions abound. How do you take good closeup photos of CRT screens? And what size TV is best? Screens came in all different sizes which means the pixels would blend together differently for each type. There may be even more variables. It’s a real shift away from the dependability of sharing a perfectly ripped gif file.

That’s probably a big reason why shaders exist. You can just add them to an emulator and hit the good old Print Screen. There’s a lot of choices out there, some surprisingly expensive, some you actually run on Blender, but for anyone interested in dipping your toes in with something simple, there’s a free shader you can try on your own sprites over at itch.io. I’ve tried some with mixed results: 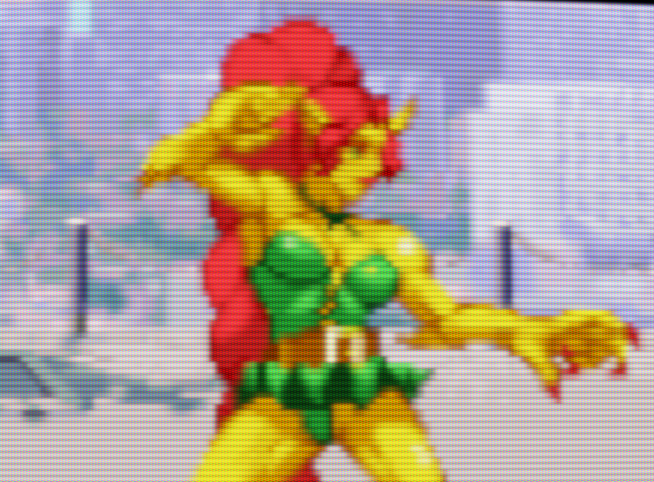 One thing I notice is that some effects just add texture while others blend pixels. Adding texture seems like the way to go for games with large sprites with big patches of color and strong outlines (Marvel vs Capcom) while the pixel smearing is really good for smaller sprites that blend lots of colors (Metal Slug)

Another reason I think these continue to be popular is because monitors are coming in both larger sizes and sharper resolution, such that the only way to show most pixel art now is, by default, magnifying it – enlarging the pixels and thus eliminating the color blurring between them. See most pixel artists on social media. CRTs offer a creative solution to this by adding a texture to those otherwise solid blocks of color. 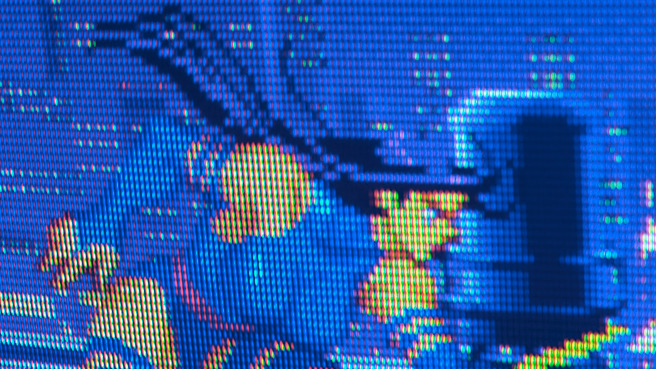 I could easily see myself getting wrapped up in how some shaders would have the best effect on some games vs others and so on. But at the same time, I’m reminded that good art isn’t filter-dependent. You pixel artists keep your skills up, and maybe someone will discover you look good on a Sanyo DS-13320 while another will say they prefer you on a Sony KV-27S42.

* I do miss me the old craze of Flash games and movies, mainly for all of the ways you could break them. Zooming in 900% on well drawn movies was great, and Flash decompilers that let you extract the art and code files made it feel like you were getting firsthand memorabilia. The closest thing we have left now is SVG vector art, which is still cool in its own way.