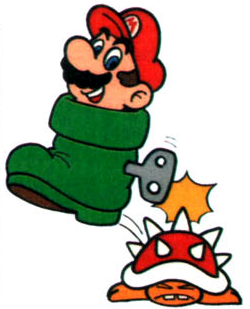 With your wind-up key spinning, and your jolly green giant-ness hopping along,
Mario must’nt have felt this powerful (or surreal) since he first beat Donkey Kong.
But to top this greatness all off, you let Mario keep his other powers.
Imagine koopas seeing this hopping deathball coming with fire flowers.

Or worse.. or much, much worse.

When first I found the goomba driving you,
I committed pre-meditated Grand Theft Shoe.
But this, being your only known origin, brings more questions than answers:
So, what, was that goomba trashpicking from World Four giant river-dancers? 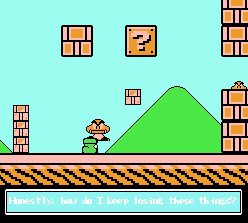 No seriously, where’d these things come from?

Alas you appeared suddenly from nowhere in the middle of the game,
only to return forever, after the end of your stage, from whence you came.
You are as rare and random a pleasure, and perhaps equally as obscure,
as the rocketship teleport plant from Mario’s previous adventure. 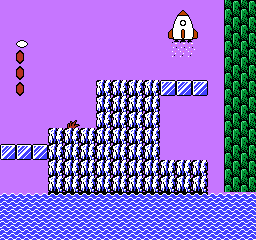 Oh man, something else I forgot that I inexplicably loved!

Perhaps my fondness comes from how little we saw of you.
300 very specific seconds we older gamers can all relate back to,
and this obscurity makes you more fun for us fans of 8-bit.
Kuribo’s Hipster Shoe: You’ve Probably Never Heard Of It. 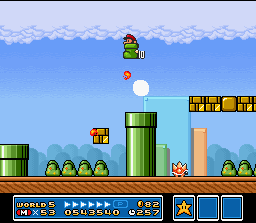 And then the Super Mario All-Stars remake came out and Kuribo’s Shoe became all mainstream..

Yes, this brief screentime probably adds to your cult status level,
a small little trinket in which Mario fans can revel.
It’s the same with other fandoms, with unintentional celebrity abounding,
How do you think Boba Fett became famous, despite not doing anything? 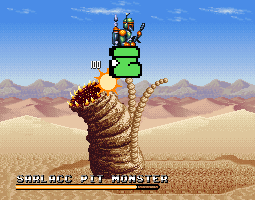 The oddest part of this whole magical experience, it must be conceded,
is that Mario could’ve beat World 5-3 without you — your inclusion wasn’t even needed.
So what does that tell us? Why were you programmed, what was your reason for being?
Doubtless, you were an act of random inspiration: From the shackles of predictability you were freeing.

Yea, truly, if this were a modern big budget game, you’d have never been approved for inclusion
by the risk-averse committees that can’t afford unprofitable games, a formula-driven collusion.
Thus you symbolize the best part of the games from my childhood, of game makers doing their jobs beyond and above:
that games were free to do anything and be nonsense, like the best nursery rhymes; you’re a product of crazy random love

Kuribo’s Shoe. You are wonderfully random in the utmost.
Kuribo’s Shoe: You are as crazy and as nonsense as this blog post.